In Bet the farm you take on the role of Yara's only child. Yara has left you her farming empire, but there’s a slight snag: your greedy uncle owns half the company. He’s only willing to sell if you can win a bet and prove you’ve mastered the ins and outs of running a farm in four years. Win the bet, fulfill Yara’s dying wish, and claim your rightful inheritance. Or lose the bet and, with it, your mother’s farm…

Your friend, Perry, will gladly help you to achieve your goals. 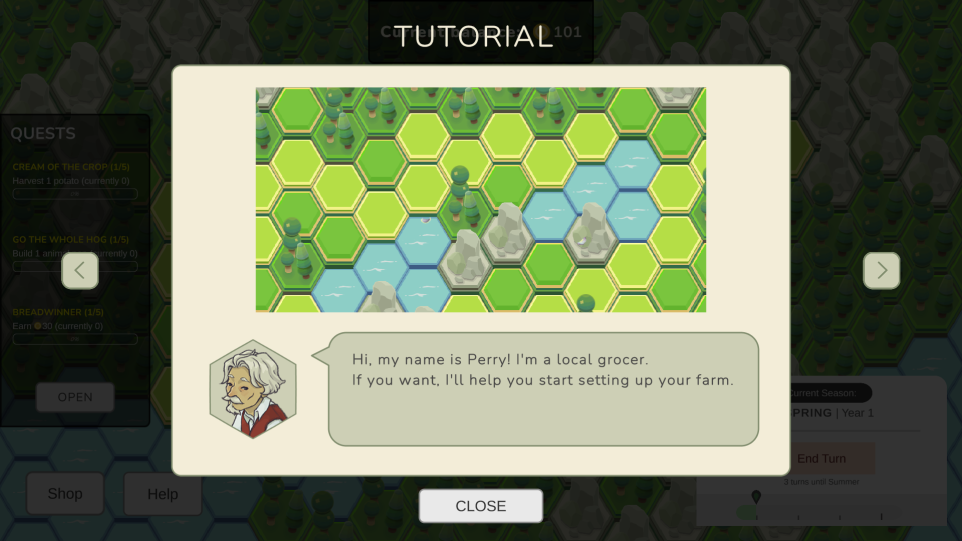 So give it your all, win the bet, and inherit your mom’s farms! You can make her proud.

If you run into music issues, refresh or download the windows build!

sigh. same bug, except the handicap whittled down to 2 cards in a hand. there was no telling what the invisible cards were, there was no correlation to what was being clicked and what was showing.

mathematically, it should not be 4 years. the first year you're making no income, because everything is growing. there's no overlap. you guys set it to difficult level by default.

add: Finally got a win condition that matches my... winning! I finished the harder crops portion (1st one) before the middle quest. Game and popups continue behind happy win screen.

Y'know if you actually wanted to make this harder, have food in your inventory spoil. There's no way a butcher is ordering year-old meat. And at those prices? your proteins will always be more expensive, like way more expensive. Oats is an instant discard, too. It'd be cool to see more hex action too, like maybe fish next to rice will enhance. Or to see it, at all, since the font is microscopic like a mid 2000s pastel webpage.

So, further delving - if one holds very very still when they click on Discard, your hand will not eventually disappear to one card. I think I managed to zero it once. Tested with a mouse and a touchpad. That might be okay, there's some on-focus junk that's crossed up. In the meantime if you have shaky hands you're SOL.

The loss condition I tested to see if it could be gamed by simply finishing the 1st quest before the other quests. This is not the case. Fully a year and half finished, quests fulfilled 3-1-2, and the game continues until you hit the loser screen. It seems like anything which is automatic will give you the win, and anything that requires clicking to fill the quest will not trigger a game win. Lose.

tl;dr This should be a game about managing interconnected hex's on limited land, and instead is a Really Too Realistic Scenario where you do everything right and still lose humiliatingly. As I said, I'm sure you meant well, but this is going to hit very close to home for the people who identify with your cast.

soclose. so close to winning. however i'll never know if i simply had no pumpkins for a year and a half or... i drew a pumpkin, and the game didn't show it. because i was winning on 4-card hands.

not only would i appreciate a mouseover tooltip for which crops are which (all your grains look the same! reverse one of them, please? that has to be dumps for learning-disabled players), but the indicator pop-ups are probably breaking things. The money bag is already updated, and yet here's 22 pop-ups.

Also, the quests are not fulfilled when something is harvested at the same time. This seems massively unfair, since they're shown *after* the quests are updated.

Also your bottom-most hex's can hardly be clicked when there's a card popped up over them. Why isn't the season done up like a thermometer, along the right side? It takes up so much real estate, when there's only one part of the infographic we need, the bar. Look at it encroaching on my poor cows.

I think you'll be fine, with a little more tweaking of the UI, and yes, the rng. Honestly, you could probably get away with the rng if you gave it another year. Do we need to talk about how racially charged instead of racially inclusive it is to have a stacked game where it's very, very likely that the Black family loses their ancestral land? Like, my dudes, you need to make the gameplay more fair, or we can absolutely call token on this. If taking *just* the African-American players, and not even other Black people, this is a pretty upsetting game wrapped up in very cozy gameplay. Like, I don't think you guys are getting that this is within great-grandparents generations, not a thousand years ago, not that it would make it better. 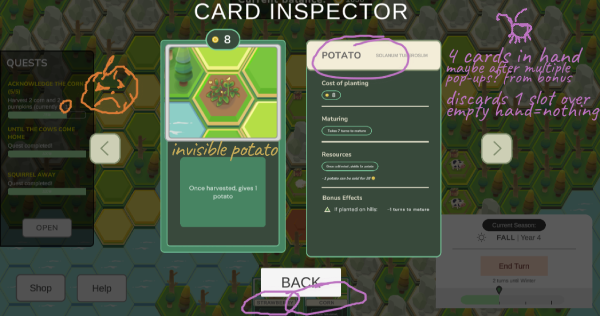 Fantastic in every way except gameplay. Bias your RNG. Don't allow players to go X amount of turns without a quest relevant card. I lost twice because the game refused to give me required cards. I should only lose due to bad planting / building decisions not because I had 5 empty and ready to go pens and didn't get a single sheep or bee for the entirety of 3 in-game years.

Great art and UI.  The character portraits, tiles, and card design were clean and pleasant to look at. They matched the theme of the game well. Enjoyed the game, but had some gameplay notes:
* Perhaps it would be better if the cards for animal pens and tilled land (forget the name of the card) were always available, or available on a fixed schedule.
* Randomness could be introduced through weather, disease, and market events rather than through availability of certain crop seeds and land use cards. A bad weather or disease event causing specific crops to fail, be worth less, or grow more slowly would feel more palatable than going through multiple rounds discarding a card at a time because you haven't gotten the animal pen for the multiple animal cards in hand or not gotten the oats you need to complete a quest.
* I liked the quests, but combined with the randomness, it was difficult to meet the requirements when I didn't have the right cards. Limiting to one discard per turn made this more difficult. Thus the outcome felt more dependent on the cards I was dealt rather than decisions I was making.

Really promising and a great result for a month-long game jam. :)

It's a really nice short game. But winning is nearly imposible or it was for me. I tried several times in the web version, few times in windows version and every time near the end of second year or even earlier the game would start to bug.
Instead of five cards I would go as low as two card. RNG is impacting you gratly with five cards and makes the game imposible when you have less.
Also in windows version when you lose there's no other way to go back to start or close the game other than puling up the task manager...

Hope to see the game fixed beacuse everything else is amazing :)

Nice, short game with fun mechanics.  Winning is greatly impacted by the RNG.

I had the issue where I could not complete the last quest, because I needed a single flower card that never reappeared for 2 years (half of the game). That was with me discarding a card every turn and in most cases placing down something as well (so sometimes up to all 5 cards being used and rerolled each turn).

Other than that, loved it and would love to see this game developed more! :)

well the game mechanics are pretty lucky, I'd wish there is a possibility to throw away more cards aside of that, I love it!

one small bug, when i finish the game in browser (winning or loosing) i'll not get back to start over :)

Hi! Glad you enjoyed our game :D As for the bug, there actually isn't a button to start over. It was not put in the game.

So, the RNG is rough on this one.  Also, sometimes during winter it won't reset your cards.  I mean I went 2.5 years without seeing rice.

Then I lucked out with the RNG and it only gave me a max of 3 cards instead of 5.  And then down to 2 cards max.

Hi so the max # of cards going down is actually a bug and not intentional. You should always get a max of 5.  As for the resetting of cards, that may be due to the fact that you may have sold a lot and clicked next turn while the notifications were still going off. It's also a bug and we plan to fix it in the future, but for now you'll just have to wait for the notifications to end and then click end turn. 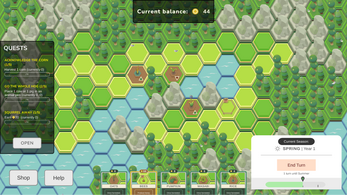 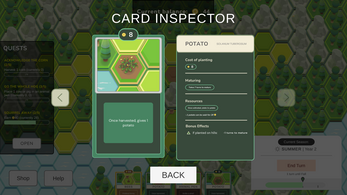 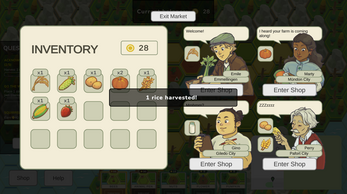 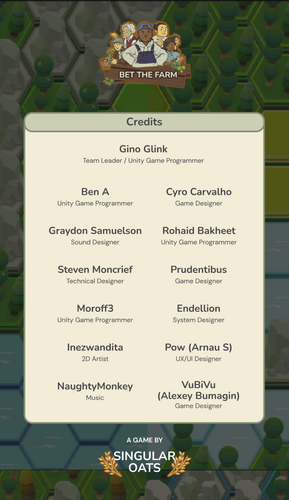